I started a painting of Staithes last week, and I had the idea of painting in a different style, using minimal colours and making it slightly abstracted.  Unfortunately it didn't work.  I started it at my Tuesday class, and by the end of the two hours I had produced something which wasn't that much different to my own style, and certainly wasn't abstract in any way. 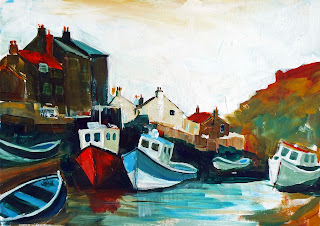 My original idea was to use Burnt Sienna, Phthalo Blue (green shade) and Raw Sienna, plus white.  You can see that Cadmium Red crept in and then Cobalt blue -I am so annoyed with myself.  I am going to start it again and see if I can do better.

Email ThisBlogThis!Share to TwitterShare to FacebookShare to Pinterest
Labels: Staithes

I hope to get more work done today on the fishing village collages.  The two below are in the first stages, as were the ones yesterday. 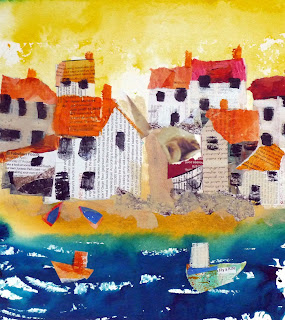 I like how this one is turning out, partly because of the lovely orange sky - I just love orange skies.  It looks very messy at the moment, everything needs to be tidied up and straightened out a little, though not too much. 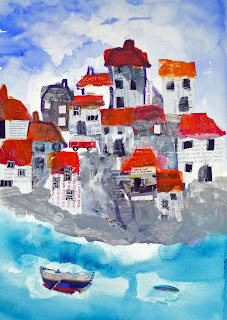 I don't really like this one at all, there are too many houses, and they are all the same, there isn't enough variety to keep interest going.  I also don't like the grey around the houses, it looks like concrete. This piece may not make it to the finishing line!

I had thought about doing some stitching on some of these collages, and I may use this piece to experiment on, as I feel I have nothing to lose. 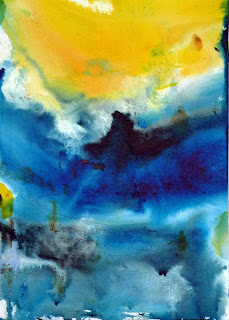 This is another 'starter' showing how I add the acrylic ink, spray it and let it flow about on the page, I love the serendipity of the bursts of different colours and tones.

It has turned out to be much more difficult than I originally thought it would be.  Because I had painted them lots of times, I thought it would just flow, but it is a completely different way of working, and the paintings I have done don't necessarily lend themselves to collage.

These are two of the four I originally started with.  The top one is on some lovely handmade paper that accidentally was stained with black ink, so it needed covering over with something.  I started by using acrylic inks to cover most of the paper with colour, keeping to a minimal palette. 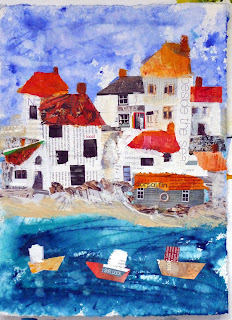 I then added the houses, roofs and windows, plus basic boat shapes, which can be seen more clearly on the piece below, which is on Bockingford watercolour paper.  They both need a lot more work. 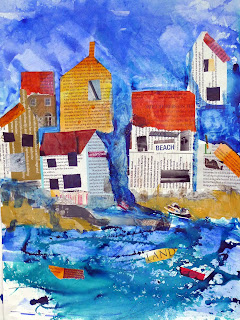 I weill post again when I have worked on them a bit more.

Here are some more from the experimental day, using my photographs of Bridlington harbour as inspiration. 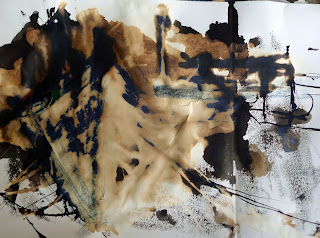 The first one is another Quink ink and bleach painting, but I got too much bleach on and the ink almost disappeared. 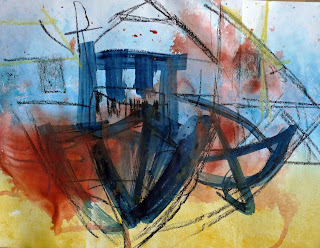 This one is a mix of acrylic inks, oil pastel and charcoal. 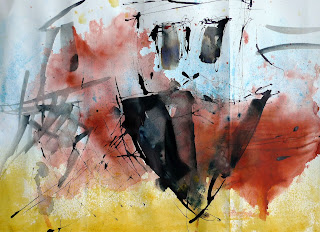 Another similar one, but using Quink ink on a background of acrylic ink. 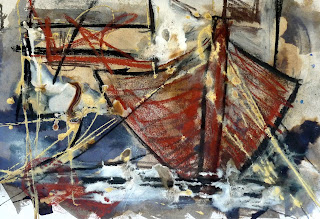 This last one is Quink ink, bleach and oil pastels.

Posted by Lynne Porter at 06:30 No comments:

Yet again a week has slipped by without my posting, time seems to be on warp-drive at the moment.  I am very busy trying to get some new work finished for our exhibition at Burton Agnes Hall,the first two weeks of September.  I am away the last week of August, so will only have one day between getting back and setting up the exhibition, so I need to get everything ready before I go away.

Anyway, here are some more pictures of the Bridlington Boats I was experimenting with a few weeks ago. 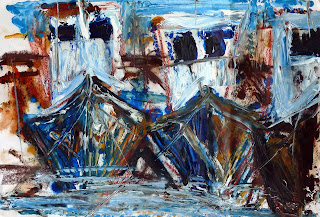 These two pieces are oil paint.  I drew them straight from the tube - no brush or palette knife.  It was very liberating as I just couldn't be precise and fussy. 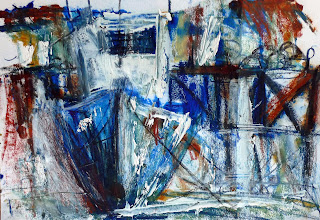 I like them both, and will do this again with other subjects. 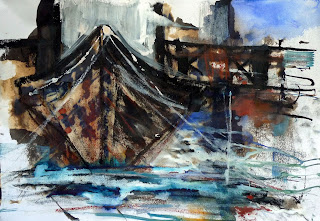 This piece was using acrylic inks, drawing with the pipette, then adding Quink ink, letting it dry and then using bleach in a plastic pipette to draw with.  The bleach technique is very hit and miss, and also quite smelly.  I don't know what effect it has on the paper, I usually wait until everything is bone dry then run the picture under the tap to get rid of any remaining bleach residue.

I spent the week before last working on images of fishing boats.  The idea originally was to work up a serious of sketches for textile work.  I did several 'mood' sheets, which is something I always did for my textiles, before I started painting seriously and ended up painting more than stitching.

I have wanted to get back to stitching for months now, but I just never seem to get the time for both painting and stitching, and can never work out how to divide my time so it does work.  Anyway, that's where I started when I did these.

These are some of the mood sheets - I like to collage my photographs, scans of my previous work, both actual and in sketchbooks, and texture/colour from old magazines until I get the right 'feel'. 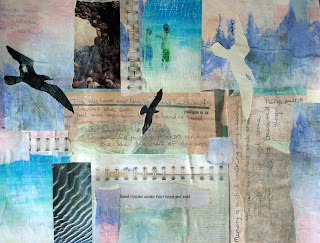 These are all copies from my 'Sea' sketchbook - although it is more of a 'mood' book in itself - no drawing was used during the making of this book! 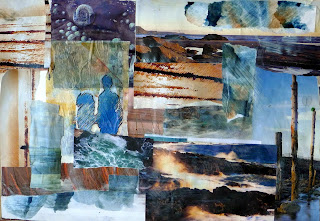 These are photos, plus some lovely imagery I found in an old  National Geographic magazine.  I like to alter the magazine imagery a little by using white spirit on paper towel, gently rubbing to disturb the ink. 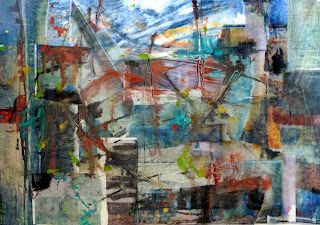 This one was similar to the one above, but I then used some oil painting, drawing with the tube, to add marks, and also splattered  some acrylic ink in places. 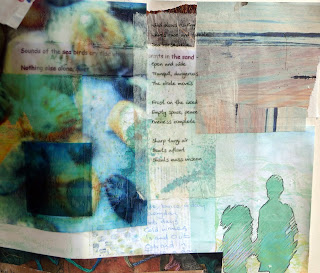 The last one is the cover of a sketchbook I made- it was meant to contain all the works from these sessions, but the size of the works ran away with me, and also I am quite pleased with some of the work, so will be framing it.  I think I will print out the work and mount it into the book, adding more marks if I feel like it needs it.

Here are some of the photo's of the studio as it is now.  This is as tidy as it ever will be.  The table at the front has wood, glue and batons for the storage boxes I am making, see further down this post. 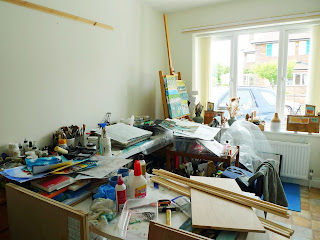 Here are the cupboards and the bookcase, moved so that there are no nasty corners where I can dump stuff. 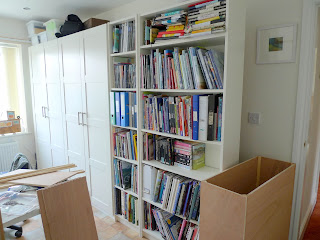 On the right of this picture you can see a wooden box?  I am making a set of three of these, each a slightly different size, to store blank canvasses, paper and board, plus some of the finished works.  They will slot behind the bookcases and hopefully keep tidier than before. 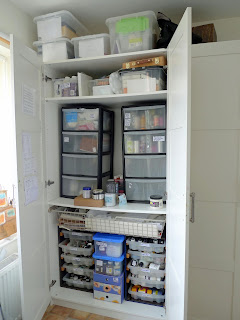 Here is one cupboard, nice and tidy, although the shelf is sagging.  I have taken a lot of the weighty stuff out of the drawers and it's now stored at the bottom of the cupboard. 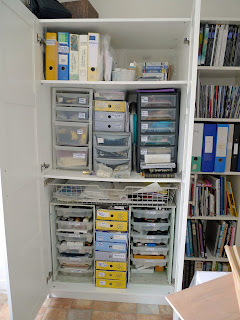 Here is the other cupboard, lovely and tidy - for now.

I have been doing quite a bit of work in between all the chaos, but just didn't have time to take photographs, put them through Photoshop and post them,  so will start today.

Posted by Lynne Porter at 16:23 No comments:

It's eight days since I last posted - again!  I think I am almost finished with the re-organising, and it's as tidy as it ever will be.

Here are some of the photo's showing the chaos when I emptied out these cupboards so I could move them. 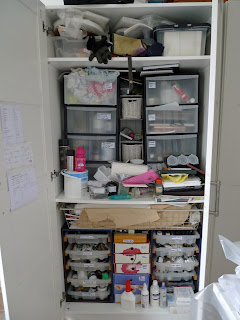 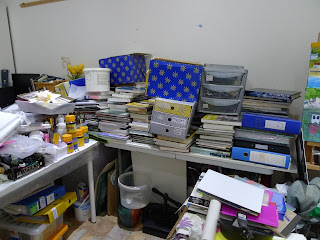 Who would imagine that emptying out a  bookcase would take so long and take up so much room! 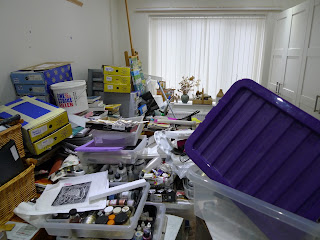 and here is the mess when I emptied one of the large IKEA wardrobe/cupboards.

More pics later.
Posted by Lynne Porter at 16:15 No comments: